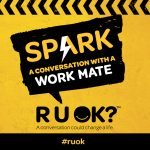 Four Letters That Could Save A Life

Life can unravel pretty quickly. Like pulling on the loose thread of a woollen jumper, it can fall apart rapidly, right before your eyes.

Anyone that has experienced that gradual and sometimes overwhelming dark feeling, can likely relate to this.

Trying to maintain a balance of increasing work requirements and the responsibilities of a family and personal life, can present a huge challenge. Add to this, mounting debt as a result of inconsistent work, and the culture of drinking alcohol to ‘unwind’, and we have created the perfect storm capable of knocking any of us over.

It is often in that moment that a permanent solution for a temporary problem presents itself.

The construction industry holds the unenviable title of having the highest rate of male suicide in Australia.

Statistics show that 53% of men are more likely to die from suicide than any other employed males in the country. Workers performing in lower-skilled jobs are at an even higher risk.

Around 190 construction workers per year (or approximately one worker every second day) is lost to suicide, according to figures from the University of Melbourne and Deakin University.

These rates are more than double for construction workers aged 15-24, compared to other young males.

Despite making up less than 3% of tradies, women are also acutely at risk.

Why is this such an issue in our industry?

Among many factors, there is a complete lack of understanding and misconception about what mental health means. A lot of people battle through without talking about it. The construction sector is dominated by males and the known stigma for them talking to others about their feelings, especially when they are not coping, only exacerbates the problem.

There is no question that the work tradespeople do is up there with the most physically demanding. This has been associated with male toughness and a ‘macho’ workplace culture. It is this toxic ‘macho’ mentality that has largely contributed to poor mental health in construction & trade labourers.

Other factors also include:

In addition to these women also face:

What are we doing about it?

Several organisations have been formed to deliver various programs that specifically tackle mental health issues in the construction sector. Many of these are also actively involved in suicide prevention measures.

Mates in Construction is one of the bigger initiatives that shines a light on psychological distress on work sites.

Bluehats works to challenge the stereotype that tough men don’t have emotional or mental health issues.

In 2009, the RUOK? initiative was born and RUOK? Day is held every year on September 9th. It is a single day set aside to remind us to:

You never know if your awareness might contribute to saving another person’s life.

Globe Group are proud to be partnered with Beyond Blue and we would encourage male and female workers to increase their mental health literacy. This will result in a better understanding of what mental health means and work towards reducing the stigma around seeking help.

Moving forward
Entrenched cultures are hard to change, and resistance is usually high. Creating a change is imperative if we want to create more supportive and empowering workplaces. Without this shift, we will continue to see a rise in the deaths of tradespeople from suicide.

Globe Group believes that a workplace that thrives is one where diversity is championed, and the difference is celebrated. We appreciate the challenges faced by individuals can differ vastly and acknowledge that all are valid.
For this reason, we have a strong focus on continual cultural improvement from the inside.